After narrowly avoiding being forced to play the violin, Tim was instead forced to play the trombone by his parents in 1988 at the age of 11. After spending a few weeks in the learners, Tim was fast-tracked into the Junior Band with the conductor quoted as saying “he was ok, and there wasn’t really anybody else”. After only two years of garden fetes and coffee mornings, Tim was approached by the conductor of the Championship Section, VSEL Works Band to take his place in the trombone section. Aching with pride, and with the encouraging words of the conductor ringing in his ears – “We’re really struggling for trombone players and we don’t know anybody else!” – he took the place that was to be his for the next 10 years – hiding on second trombone! At about this time, Tim also got his first taste of the big band sound, after the local dance band realised that he could fill the third trombone seat which had been vacant for years. Realising that there may have been an element of luck in his ability to find himself being asked to play in various ensembles, he decided that it was time to try and pay back the people who had blindly and involuntarily given him chances to play in some of the areas finest bands. A rigorous and extensive practice schedule, demanding heavy personal sacrifices, was considered and eventually discarded in favour of blind panic, as the area’s lead trombone player decided he was fed up and went off to be a taxi driver. This prematurely propelled Tim into the lead trombone seat in most of the bands he was involved in, simply due to the fact that there was nobody else. A further ten years of ‘on-the-job learning the hard way’ and Tim became the player you can hear today, enjoying playing with The La’al Big Band (who, you guessed it, were struggling for trombone players and couldn’t find anybody else).
Tim would like to thank Urbie Green, Bill Watrous, Carl Fontana, George Chisolm and the Lurpack Man for producing music which has been so jaw-droppingly good that they have periodically tempted him to quit!
TV credits include an appearance on the ‘Hairy Bikers’ programme with the Shipyard Band playing the Hovis tune for 30 seconds behind the Geordie who was holding some cold soup.
Other notable achievements are playing in the National Brass Band Finals, Grand Shield and a week-long residence in the pit orchestra at the world famous Palladium (Millom).
He also writes long profiles!

Sarah’s attempts at musical greatness began at the age of eight when a lady came into primary school with a bunch of cellos. To cut a long and tedious story short, the cello didn’t last long and the trumpet became Sarah’s weapon of choice for the next 20-odd years. In 2008 Sarah suddenly came to her senses, had an epiphany and realised she should’ve in fact been playing the trombone all along. Coincidentally her trombone originated from South Cumbria and was purchased from a taxi driver who had once played lead bone in some dance band down there. Rumour has it there was a strapping young trombonist called Timothy who scared him away.
Aside from trombone, Sarah is responsible for the trumpeting Herdwick that is The La’al Big Band’s logo and creates all the artwork for the band. She’s a dab hand with the old paint and canvas, and if you want to see where her talents really lie, visit www.sarahtaylorart.co.uk

Colin’s involvement in music started in his school years – he began playing the trombone at the age of 11 and hasn’t really stopped since.
Over the years he’s attended various summer schools, workshops, and conducting courses and performed with orchestras, choirs, brass ensembles, brass bands, big bands, wind bands, jazz bands and musical societies as either a player/singer or conductor.
In September 2000, Colin was awarded an Honours Degree in Brass Band Studies, majoring in performance and composition.
He is currently MD of Whitehaven Male Voice Choir. 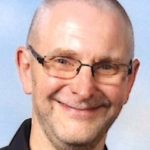 Born and raised in rural Lancashire, Cyril Stoneham took up the tenor trombone aged five playing in local brass bands with his father. He switched to the bass trombone when aged twelve and explored other musical genres including big bands and symphony orchestras. He was a member of the Lancashire Students Symphony Orchestra for ten years in which time he toured most of Western Europe.

In August 2010 he started working in the West End playing for Shows including Love Never Dies, The King and I, 42nd Street and Les Miserables which gives him an opportunity to perform on one of his ‘doubling’ instruments, the tuba.

In 2015, he moved back to North Lancashire/South Cumbria becoming a full time member of staff with the Cumbria Music Service, based in Barrow-in-Furness where he now lives. He has become active in the local music scene playing in two local brass bands J36Brass and Ulverston Town Band as well as playing for some of the local shows and musicals. He is currently the conductor of the Barrow Shipyard Junior Band. 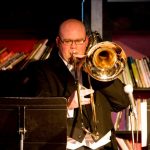