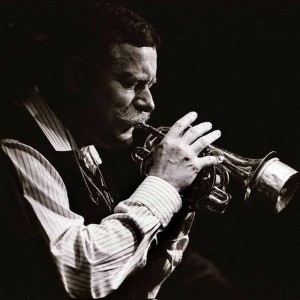 La’al Big Band are thrilled to announce that we will be joined by International jazz trumpeter Janusz Carmello for a concert at The Seacote Hotel, St Bees, on Sunday 7, June. More details will follow shortly. In the meantime, here’s a short resume of Janusz Carmello.

He was born in Warsaw in 1944, where he started to play jazz from the age of 18. In 1966 he moved to Milan and combined a job as an electrical engineer with playing jazz in a variety of styles and bands for 7 years. In 1973 Janusz and his family moved to London where he has been living and playing ever since.

Janusz has been active on the British and international jazz circuit for many years and has played with a great number of top flight musicians including Charlie Mingus, Duke Jordan, Buddy Tate, Eddie “Lockjaw” Davis, Al Cohn, Albert Nicholas & Spike Robinson to name but a few. Over the years he has collected a host of different awards including the prestigious Musicians Union Most Outstanding Soloist for his performance of Moonlight in Vermont.
Now semi-retired and rarely playing outside London this will be a very rare opportunity to hear one of the real masters of jazz trumpet.

Playing a distinctive pocket trumpet, Janusz’s style is firmly rooted in the hard bop idiom of his idol Clifford Brown but don’t be surprised to hear a few lyrical passages reminiscent of Chet Baker and the occasional nod in the direction of the Grandfather of Jazz Trumpet, Louis Armstrong.

Another Great Night at The Seacote, St. Bees

Gosforth gigs for your diary!